The Windows, The Cemetery, and The Rectory

The window over the altar (centre) was installed in 1843, the oldest stained glass windows west of Quebec. The top panels bear ecclesiastical and Masonic symbols at left, and the royal symbols at right (crown and three lions). These reflect the attachment of the Parish to the Anglican Communion and to the Crown of Great Britain. The middle panels have a Trinitarian theme with the Bible (God), the Cross (Christ), and the Dove (Holy Spirit). The lower panels contain an equilateral triangle (the Trinity), the Greek letters XP (Christ) and IHS (Jesus), and a trefoil (the Trinity). Oak leaves border the sides, a traditional British emblem.

Seven of the side windows are the work of R. McCausland & Son of Toronto. The first window, commonly referred to as the "Resurrection Window", was installed in 1896 (left). It depicts the Tomb on Easter morning, with the Angel pointing: "Behold the place where they laid him" (Mark 16:6). Mother-of-pearl glass was used for the Angel's wings and robe, giving the appearance that he is glowing even though the windows on this side do not receive much light. Several levels of glass were used, giving a three-dimensional effect.

The Alma Memorial Window, installed in 1893, depicts the Presentation of Christ in the Temple (right). The base panels have lilies and roses of Sharon, which are emblems of Christ. An angel holds a scroll in the top roundel: "The memory of the just is blessed". Alpha and Omega are displayed on either side.

-The Windows in St. Mark's Church, by The Reverend H.D. Maclean, Rector of Niagara 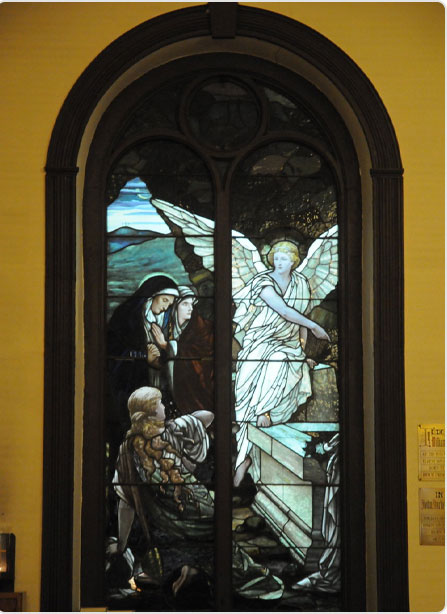 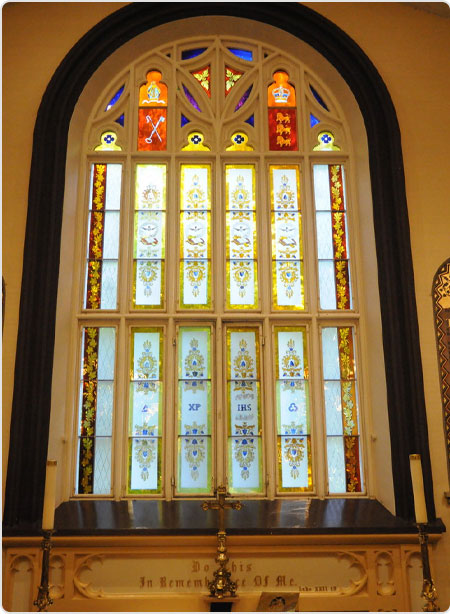 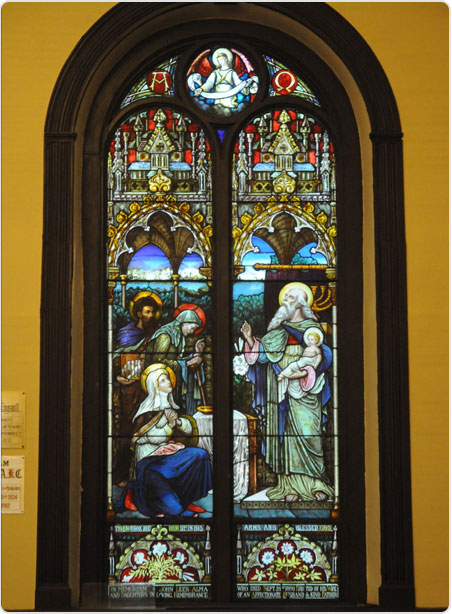 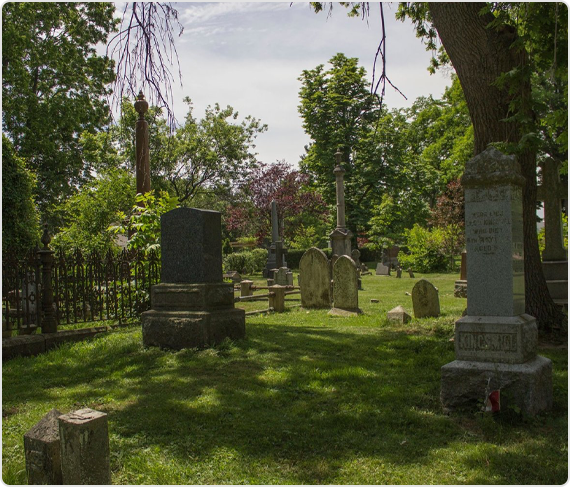 The earliest marker in the cemetery, dated 1794, is that to Elizabeth Kerr, daughter of Molly Brant and Sir William Johnson. An earlier stone was uncovered during the 1838 construction of the transepts and is now housed in the church. It is in memory of Leonard Planck a member of Butler's Rangers. Their barracks and hospital were to the east of the church. Planck died there in 1782 as the result of wounds inflicted at the battle of Upper Sandusky.

This is the oldest cemetery still in use in the province and the antiquity of the monuments and the historical importance of those interred here are of interest to many historians and genealogists.

Contact the Archives Committee for Information on those interred in our cemetery and other historical, or genealogical information. 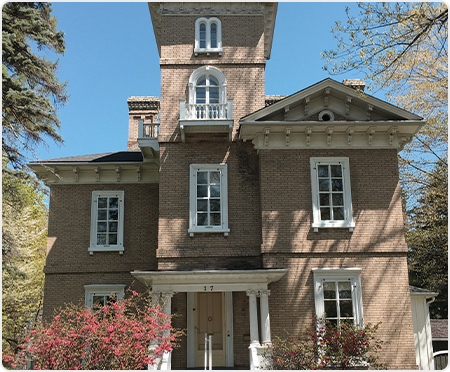 The first two ministers at Niagara owned their own homes. When William McMurray, the third Rector arrived, he insisted that the Church should build him a home. As a result, the rectory, which stands west of the Addison Hall, was erected in 1858.

It was constructed of bricks that arrived from Britain as ballast in the sailing vessels and were purchased from the estate of Samuel Zimmerman. The grandiose style chosen was the Tuscan Villa. Most of the priests since that time have made their home in this rectory.

For many years Addison's collection of books was housed on shelves in the rector's study.