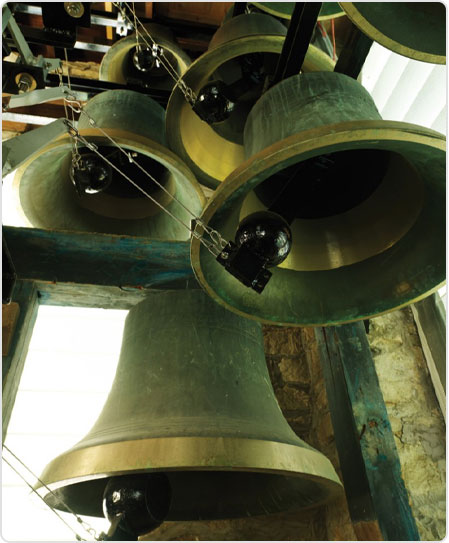 The rebuilt and enlarged chime of St. Mark's Anglican Church, Niagara on the Lake, has as its basis the original six bells cast for the church by Meneely & Company at West Troy, New York, in 1877. This set covered the first six notes of a diatonic major scale from A3; that A bell, known as the tenor of the chime, was said by the makers to weigh 1,240 pounds, and was arranged in full swinging (church bell) mountings; the remaining bells were hung stationary from a timber frame, parts of which are in use today.

In 1917, the church ordered three additional bells from the Meneely Foundry, which would be the next two diatonic notes of the scale, completing the octave in A, plus one semitone (G4 actual), the "flat seventh" scale degree. This chime of nine bells remained in use until the bells were taken down for tuning at the beginning of the present project.

The 1877 and 1917 bells have been for the first time tuned to "five point" or carillon bell standards (sometimes referred to as "Simpson" tuning); and nine new bells have been cast and tuned to agree and extend the compass. The chime now covers a diatonic range of an octave and a fifth, plus six semitones (all semitones except the lowest two within the range). This provides considerable musical flexibility to play hymns and other appropriate selections in many different keys. The pitch basis for the chime was decided from the average of the old bells, and is close to the older International pitch of A4 = 435 hz; and the chime is tuned in equal temperament.

Rather than the original style chime-stand with large "pump handle" levers, the chime is now played from a "baton" type carillon style keyboard, where smaller levers are provided on two levels (upper ones corresponding to the "black" keys of a piano), and having pedals providing alternate control of the lowest eight bells. This keyboard differs from those playing, for instance, the Peace Tower carillon in Ottawa, and the carillon at the Rainbow Tower, Niagara Falls, only in length, (those instruments having 53 and 55 bells, respectively). A radial type transmission action is used between the keyboard and bell clappers; all actions and clappers are pivoted on sealed stainless-steel ball bearings. All action, clappers, and bell fittings are new, and new sections of structural steel bell framing houses the new bells. The tenor bell has been rehung in new swinging mountings, and is played from the keyboard via the external hammer, so that it may also be swung for a call to service bell.

In addition to playing manually from the keyboard (through which the chimer is in full control of dynamics, by variation of touch on the keys), the instrument is now equipped with an electro-pneumatic playing system, through which hymns and other melodies may be programmed on a daily basis as desired for automatic play under control of a computer.

Below is a picture of the different commemorative plaques you can find inside the church about the various bells donations and restorations history. 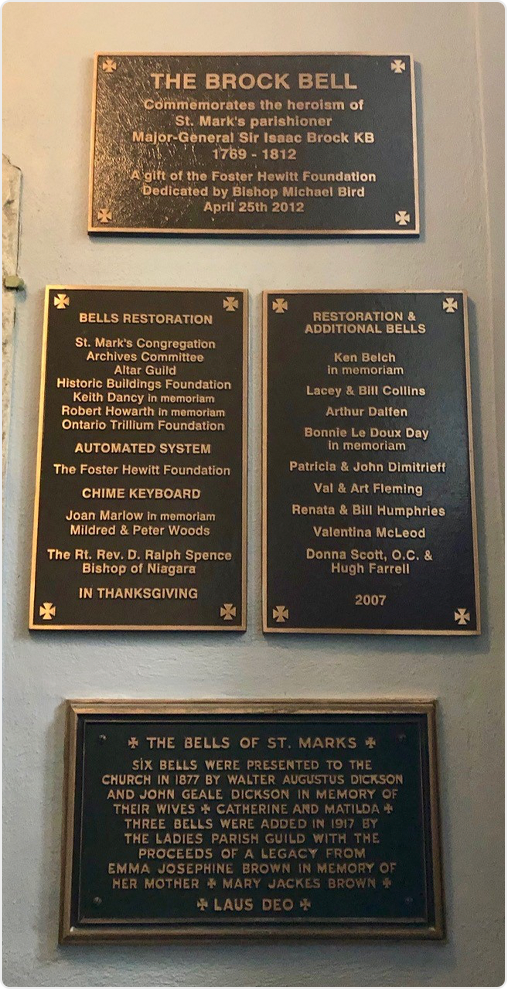